A healthy turn out at Thorne for the Installation of Brother Jonathan Armstrong as Worshipful Master, one of a number of very youthful Mark Master Masons who dominate the ladder at this Lodge; it bodes very well for the future. For the time being it was down to the present Worshipful Master, W.Bro. Jason Figgett, another diminutive young cove to open the Lodge which was done but, before the opening procedures were completed, V.W.Bro. Bob Corfield gave a short, but very moving eulogy in respect of his good friend, Right Worshipful Brother George Henry Philip Birch. A man who was an inspiration to us all, most kind and caring with a truly benign disposition, he is , and will continue to be, missed.

Attention then turned to agenda issues which included a ballot for a joining member W.Bro. Adrian Rounce and a candidate, Bro.Robert Gunther. This proved positive, ergo the team taking post today will have to consult their ritual books for the new positions they will occupy. A report then introduced Asst.Prov.G.D.C., W.Bro. Richard Brown who advised that the Assistant Provincial Grand Master, Worshipful Brother Trevor Bolton, accompanied by W.Bro. Alan Corbridge, Elected Member of the Charity Committee was without and demanded admission which was promptly acknowledged and they entered with appropriate Escort and salutations were given. The Installing Officers then took post, Bro. Jonathan was presented by W.Bro. Ron Oldfield and duly answered the questions posed but as he had not served as a Warden for a full twelve months, he being stranded down south due to the beast from the east, a dispensation was read.

An Installed Board convened, Bro. Jonathan was obligated, the signs and secrets inculcated, Collar and jewel together with the Badge invested and he was placed in the Chair, all in first class form by Jason who should be proud of a job well done. The Brethren having been admitted, W.Bro Jonathan was proclaimed as Worshipful Master of the Thorne Lodge for the ensuing year and saluted accordingly. The working tools were then presented and explained by W.Bro.Barry Edge with the explanation of Key Stone Collarette in the hands of W.Bro David Spencer, that being presented by W.Bro. Jason. The latter then went on to deliver the Address to the Worshipful Master; Address to the Wardens by V.W.Bro.Bob Corfield; Address to the Overseers by W.Bro.David Spivey and, to the Brethren, by the Asst.P.G.M., W.Bro. Trevor , all in excellent form. The Past Masters Jewel was then presented to W.Bro.Jason, well deserved by W.Bro. Mick Ricketts in his own unique style, the remaining agenda items covered and the Lodge closed.

The Festive Board was well received when the Toast to the Province was submitted by W.Bro.David Carter, an appropriate touch of ingratiation stressing that without the considerable input of Provincial Officers Mark Masonry would be the worse for wear, they exhibiting a good sense of humour and a degree of common sense,  now there is a quality in short supply in society at large. In response W.Bro. Trevor congratulated W.Bro. Jason on his work emphasising that he should be very proud  of what he had achieved. He also praised the efforts of the Almoner, W.Bro. Mick Ricketts, a post that he has undertaken with distinction for many years.. A reminder for the Annual Meeting of Provincial Grand Lodge to be held in Bradford on the 18th April and the Sesquicentenary meeting of the Province on the 7th August in Harrogate; a Jewel is now available to order do not leave it too late.

The Toast to the Charities was in the hands of W.Bro.David Spencer who praised the speed of response of the C & W, a wheelchair in the hands of a Brother within forty eight hours, something of which we can all to be proud. A significant donation was handed to the Festival which ensures that Thorne Lodge of MMM will be a Grand Patron Gold Award holder. By way of a reminder West Riding Masonic Charities Limited [ W.R.M.C.L.] agreed last year that the Cleeves and Whitehead Trust could use their Care and Support Officers on a “need to basis” taking some of the pressure of Liz Nowell. They are now well established being Sharon Mees  and Elaine Dunwell together with our own Liz Nowell. The two C.S.O’ s are employed by C.H.O.I.C.E.S. an acronym standing for CharityHelpOfferingIndependentCare, a division of W.R.M.C.L. .

The Toast to the visitors was delivered by W.Bro John English who welcomed sixteen visitors from twelve Lodges and trusted that they had enjoyed the ceremony and found the Festive Board to their liking.  Responding, W.Bro. Steve Croot of St Swithuns Lodge Bo. 445 commented that he was always told that a good speech had a good start, a good end and as short a time as possible between them,  an excellent end to a very enjoyable Mark meeting.

Smile, be happy, you are a Mark Master Mason 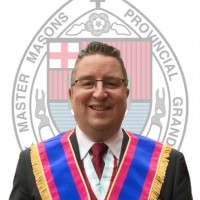