The camaraderie of Mark Masonry on display at St Chad Lodge of MMM No. 374. 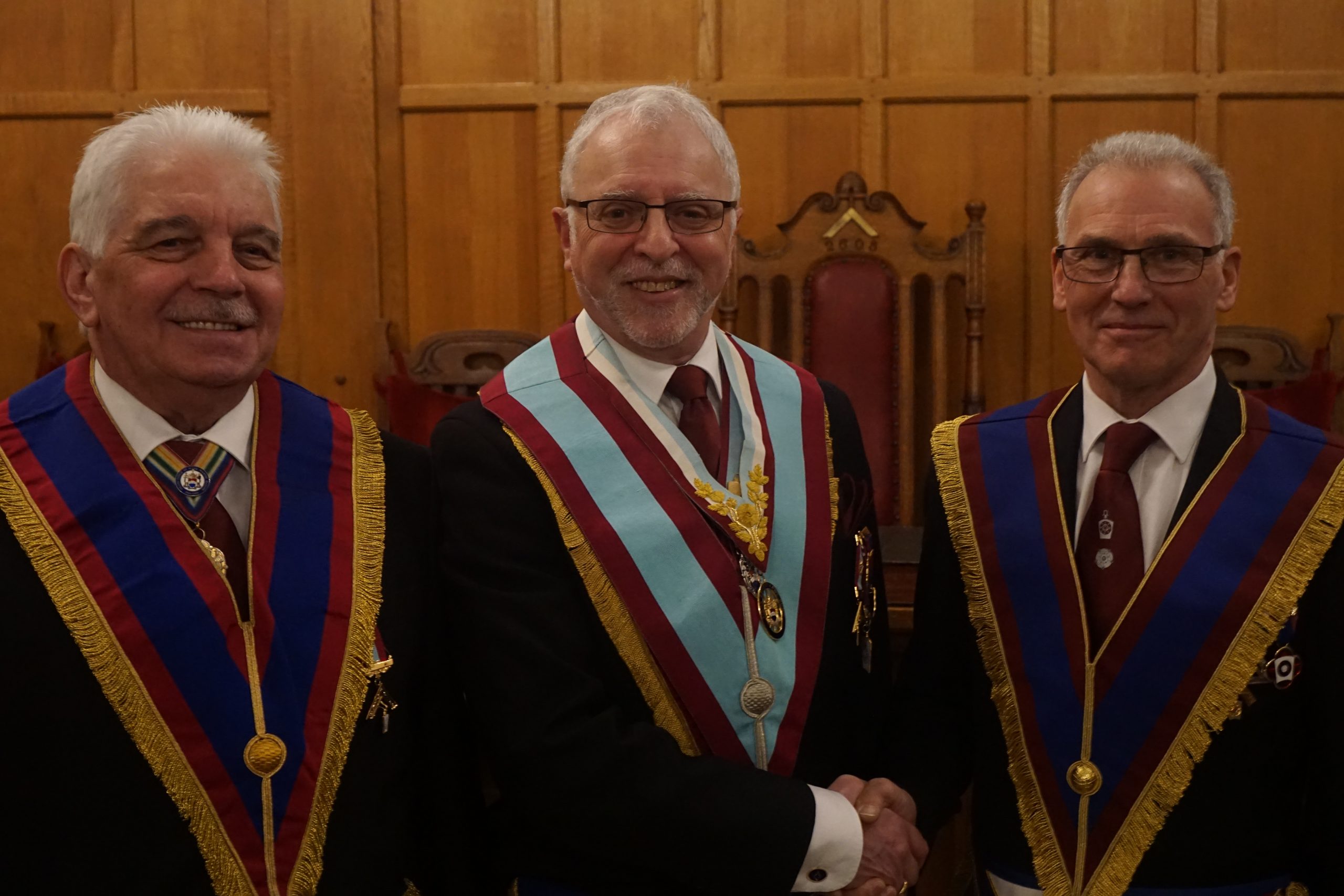 Thursday, 13th February 2020 and from the moment the Lodge was opened in due form by the Worshipful Master, W. Bro. Derrick Allen, that wonderful friendly atmosphere that permeates Mark Masonic occasions was there to behold; including flowing ritual of a high standard, that being set by W.Bro Derrick.

Minutes of the previous meeting having been approved, a report heralded the arrival in the Lodge of Prov.Asst,GDC, W. Bro. John Gray to announce that the Provincial Grand Junior Warden, the Representative of the Provincial Grand Master,  W.Bro Graham Pearce was in attendance and he duly entered accompanied by Worshipful Brother Alan Corbridge, Elected member of the Charity Committee, both received appropriate salutations. The scene was now set for the Installation of Worshipful Brother Paul Jacobson, W.M. in 2007, to savour the honour of taking the Chair for a second time and the Installing Officers took post. W.Bro.Paul was presented by W.Bro. Howard Bott and all below the rank of an Installed Master withdrew for a short time.

An Installed Board was convened, W.Bro. Paul recited his obligation, was invested with the Collar and Jewel of his Office and placed in the Chair by W.Bro. Derrick. The remaining inner workings fulfilled, the Board of Installed Masters was closed and Brethren re-entered the Lodge when W.Bro. Paul was proclaimed Master of the St Chad Lodge of M.M.M. No 374 for the ensuing year,  The officers for the coming year were then Appointed and Invested, no surprises there, which was followed by the Working Tools being explained in exquisite style by Worshipful Brother Geoff Wilson, an example to all, word perfect and he is now ninety five years young, what a star. The standard had been set and was maintained by W.Bro. Richard Brown providing the explanation of the Key Stone Collarette, W.Bro. Paul Leach then transferring the Grand Patron Gold Award Collarette and, later, presenting a cheque for four thousand five hundred pounds to the Festival, superb.

The Addresses were then delivered in the same excellent fashion as those before by;

to the Overseers​​​​ W.Bro. Barrie Fothergill

W.Bro. Richard Brown then presented the Past Masters Jewel to W.Bro. Derrick, thanking him for all his hard work over the past two years. Surprise, the W.M. W.Bro Paul. then presented him with another P.M.Jewel which had been donated by the Provincial Grand Master, R.W.Bro. Jim Steggles to be worn by successive Past Masters henceforth during their tenure. A lovely touch. The remaining Agenda items smoothly despatched, the Festive Board called. This had been a delightful Ceremony to witness and all can be truly proud of their effort.

The Toast to the Province was submitted by W.Bro.Denis Parfitt who drew an allusion of Provincial Grand Lodge Officers walking with God. The justification is obvious as without their combined efforts Freemasonry would not survive, they are the back bone. Responding, W.Bro. Graham provided a reminder in respect of the Provincial Grand Lodge Meeting at Bradford on April 18th. All Worshipful Masters and their wardens are expected to attend, it is one of the obligations of Office, If possible bring Brethren along to witness the working of the P.G.M.’s Lodge. He then stressed that whilst Charity is a noble virtue and practised by Mark Masons we must also strive to be good members of society setting the right example. Could we also remember to use our Mark when signing the register, it is a function that truly differentiates us from Masonic colleagues. Finally , embrace the 4 R’s, it is necessary to ensure our future success..

The Toast to the Charities was proposed by W.Bro. Paul Leach who thanked all the Officers of the charity, himself included, for  the hard work that they do on our behalf and he was right to stress the point. The Cleeves and Whitehead Trust prospers, yes from the generosity of the Brethren but primarily by the investment and support by all the officers,  together with Almoners and Charity Stewards in each Lodge  W.Bro Alan began his reply by thanking the Lodge for the generous donation, he had seen nothing of this magnitude in his six years as a member of the ‘Magnificent Seven’.   He also supported the comments of W.Bro.  Paul but further stressed that it is ‘Our Charity’, unique in Mark Masonry and, with the continued support of the Brethren,  he was confident that it would prosper and go from strength to strength, the Jewel in the Provincial Crown.

The remaining Toasts were then completed two innovations that I had not witnessed before,  W.Bro. Paul presented some gifts to Brethren in recognition of their work for the Installation and flowers to W.Bro. Graham to take to his wife. The Visitors Toast was given by W.Bro. Barrie Fothergill by singing the ‘Song of Welcome’ and truly we had experienced warm masonic hearts of welcome

As if it were needed, this meeting had seen further proof of the ‘Magic of the Mark’, you lucky people