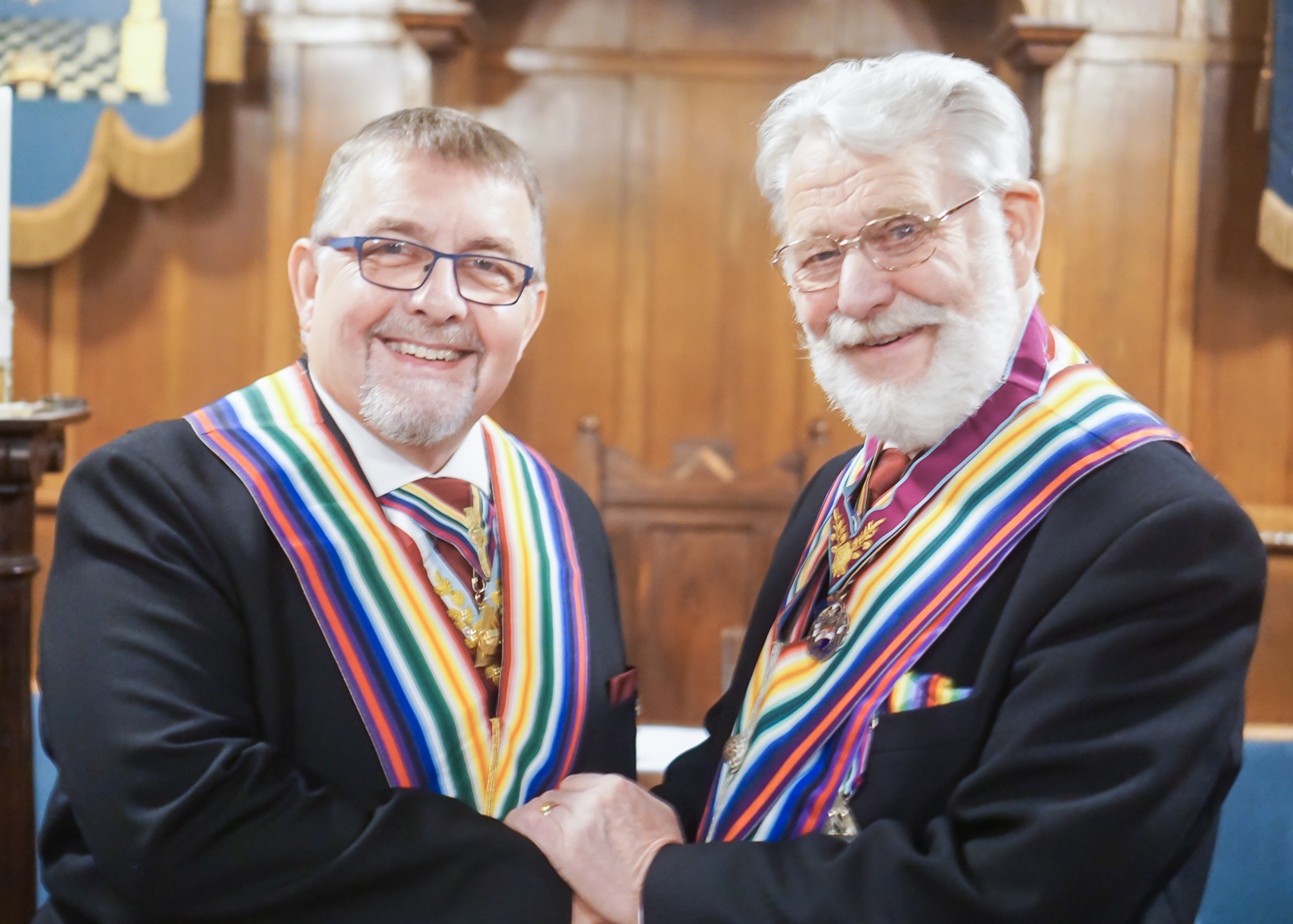 Brethren from the four corners of the Province congregated,   including a goodly number of Post Captains in the West Yorkshire Fleet, at Knaresborough Masonic Hall to witness W.Bro. Brian take the helm of the good ship Abbey. Present was the Deputy Provincial Grand Master, W.Bro. Alan Oldfield who was welcomed by the Skipper, Worshipful Master, W.Bro. David Lees and given appropriate salutations. W.Bro David then opened the Lodge with all assembled on the foredeck, minutes confirmed, a ballot was taken for a joining member Brother Bill Coverdale which proved positive and he was admitted, together with Bro. Garth Rowland, similarly approved at the previous meeting. They were welcomed by W.Bro. David and took their places in the Lodge

W.Bro. Brian, already an Installed Commander, nay he also holds Prov.R.A.M.G.R., and this, therefore, was a short ceremony. Those below the rank of an Installed Master left for a short while, David having paid sincere thanks to all those who had held office in the Year.  W.Bro. Brian then repeated necessary parts of his obligation , was invested with the Collar of W.C. and placed in the Chair of the Lodge by W.Bro. David. Appropriate at this juncture to mention that David has been seriously ill of late, spending a number of weeks in hospital. In the light of this, his performance was admirable, a stunning display of commitment, tenacity and determination, he was not going to let the Lodge, or his Brethren, down and he did not.

The Brethren below the rank of an Installed Commander admitted, W.Bro. Brian was duly proclaimed as W.C. and the Keystone collarette was explained in fine form by W.Bro. Kevin Lloyd and presented to Brian by W.Bro. David. This then gave rise to one of the highlights of the ceremony, the Exhortation in the hands of W.Bro. Les Davy which he delivered in a clear, precise and measured manner,  a delight to witness. The Appointment and Investiture of the officers was then despatched, no surprises other than one of the longest presentation addresses I have ever heard and this was to W.Bro. Paul Clark, the Organist!

The Installation now complete, attention turned to the Agenda and a Past Masters Jewel, richly deserved, was presented to David by W.Bro. Les Davy who, in passing, mentioned that David is , of course, the Junior Vice president of the Leeds and District I.M.A. At this juncture, we were set to move to closure when  the Deputy. P.G.M., W.Bro. Alan called W.Bro. Ron Moreton on to the floor when to the surprise, and delight of all, W.Bro,Ron was presented with the West Yorkshire Royal Ark Mariner Distinguished Service Award. A very singular honour, list of recipients in the Year Book, and undoubtedly well merited. It left Ron virtually speechless which very few of us have ever seen before. The lodge was then closed.

The Festive board was a delight and I have seldom seen anything as good with five courses, tea/coffee and mints., replete was the word The Toast to the Province was in the capable hands of the Lodge D.C., W.Bro. Richard Stone who praised the Provincial officers, and their Grand Lodge colleagues, in  being there when required and with the fund of expertise and experience they possess , maintaining the Lodge on the right track. He considered also the commitment of the Rulers in in supporting all the Lodges. In response W.Bro. Alan, emphasised that , whilst all is well with the Festival, it is still paramount that all Lodges bear in mind the need to qualify for Grand Patron Gold Award to ensure the Province is similarly confirmed. In respect of the Festival Festival, only one major event next year, the Masonic Cycle Challenge in June 2020, 400 miles, for details see the web site home page.  Finally arrangements have been made with Crest Regalia for them to supply West Yorkshire Brethren at a discount of 20% which will be passed on to the Festival, look no further, details on the web site.

A pleasure to see W.Bro. Gerry Barker present but sadly the only Commander in the Chair to attend. Can I remind all Worshipful Commanders that, accompanying the delight of being the Boss comes the obligation to represent your Lodge around the Province. Hopefully see many more of you in 2020.

What a wonderful Fraternity of which to be a member.