The Cleckheaton Mafia voyages to Portal Lodge of RAM No. 127 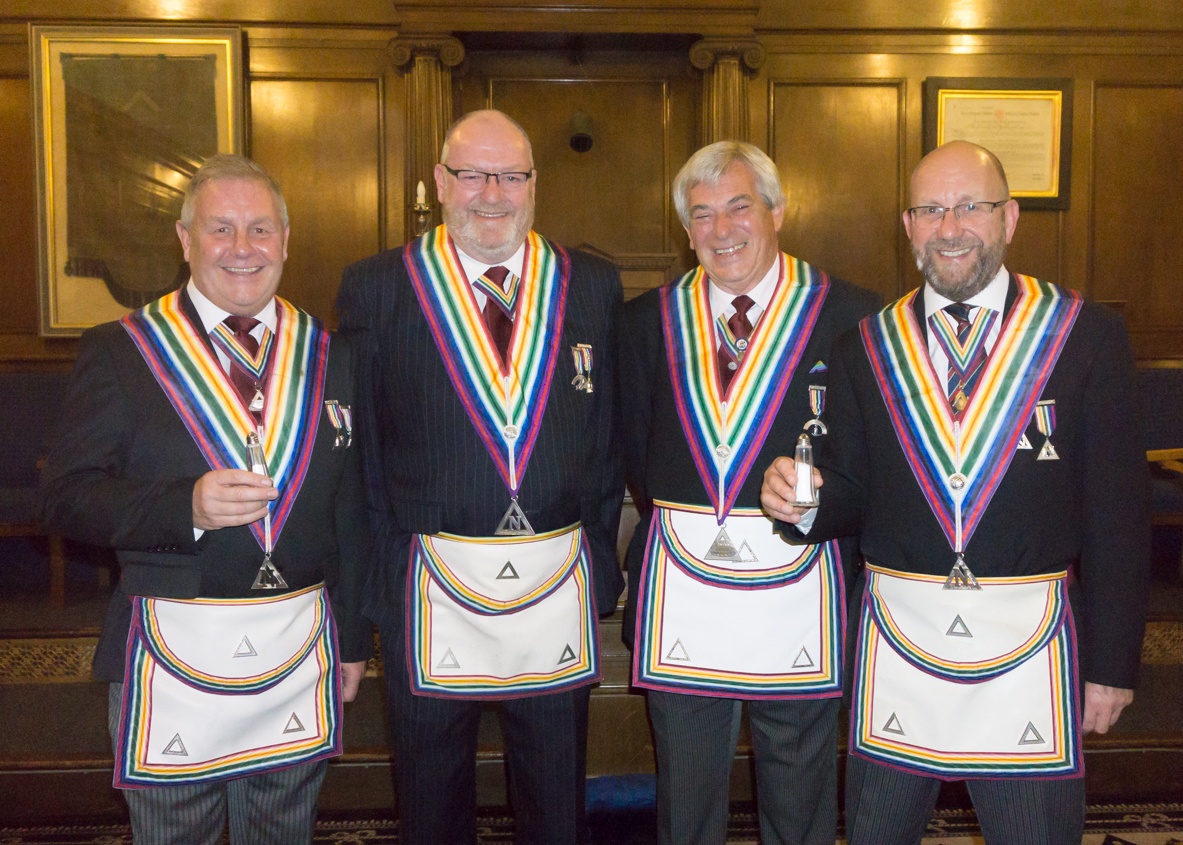 On the 26th June the Commander of Old York lodge of RAM T.I.  W.Bro Keith Watson and three of the crew, W.Bros Jagger ,Johnson and Wilkinson, cruised into the south of the Province in order to dock at Portal Lodge of Royal Ark Mariners No. 127. What a day to arrive, not only was it the installation but also the 30th anniversary of its consecration. With the presence of the Admiral of the Fleet, R.W.Bro.James Steggles,G.M.R.A.C. and Rear Admiral Brian Batty PProv.GM ,both welcoming the visiting crewmen aboard it looked like it was going to be a good night .

After a necessary explanation of the means of retreat in case of fire given by the scribe, W.Bro.Ian Yates, the Lodge was opened in due form by the Commander W.Bro.Shaun Keighley. Those who know Shaun are aware that, during his tenure of office in the last two years, he has been a regular visitor to Royal Ark Mariner Lodges throughout the Province and it was nice, in some part, to repay him by visiting on his last night .

The Main business was to install Bro.Trevor Hurd as Commander for the ensuing year, this was done in an exemplary fashion by W.Bro.Shaun. The brethren were called back into the lodge and after acknowledging W.Bro. Trevor as Commander showed us a demonstration of how, in the south of the Province, the brethren do the Hokey Cokey round the triangle; with W.Bro. Duncan Smith being the DC in charge it promised to be a night of fun and frolics .

Having brought the junior crewmen under control W.Bro.Duncan Smith gave the address to the Worshipful Commander in an exemplary manner as did W.Bro.Charles Lindsay  as he explained the Keystone Jewel. The exposition was given by W.Bro.Ian Yates, a brilliant performance that impressed  W.Bro R.E Wilkinson so much that he decided to approach him and suggested that if he ever jumps ship he will be welcome at Old York RAM. W.Bro.George Herd  was then welcomed as a re-joining member.

An Excellent ceremony well worth the voyage to the south and, In the mess below decks, we were amply fed and watered as is the custom at Barnsley Docks.

With the Admiral of the Fleet, the PGM responding to his toast, he informed us that henceforth only three recommendations for RAMGR will be available for the Province, however with this Province he is able to give the West Yorkshire Royal Ark Mariner Distinguished Service Award and he congratulated the Lodge on attaining 30 years with some of the Founders still attending .

With the Commander and Immediate Past Commander both giving speeches about each others virtue in the role, the  toast to the visitors was  proposed by Bro Roger B Harvey Junior Warden and ably responded to by W.Bro Phillip Holmes (not Michael ) of Wentworth Lodge of RAM No53. The raffle, which raised £93.00, was then drawn by the Admiral, of the Fleet, the PGM who promptly drew himself the winning ticket !!

All in all a very good night and well worth visiting in the future, the brethren of Portal Lodge made all the visitors very welcome. The Cleckheaton Mafia renewed old friendships and retired home happy .No wonder visiting is at the heart of our order.

This article is courtesy of the Old York Mafia, W,Bro.Keith Watson W.Bro.Andrew Jagger aka ‘Dame Evadne Hinge, W.Bro.Ed Wilkinso, aka ‘Ant’ and W.Bro.Andrew Johnson aka ‘Dec’, sadly ‘Hilda Bracket’, W.Bro. Mike Holgate not in attendance. Absolutely delighted to receive this from them, particularly as I was involved, no way I could do a report. I now look forward to more of you following this LEAD, I HOPE!