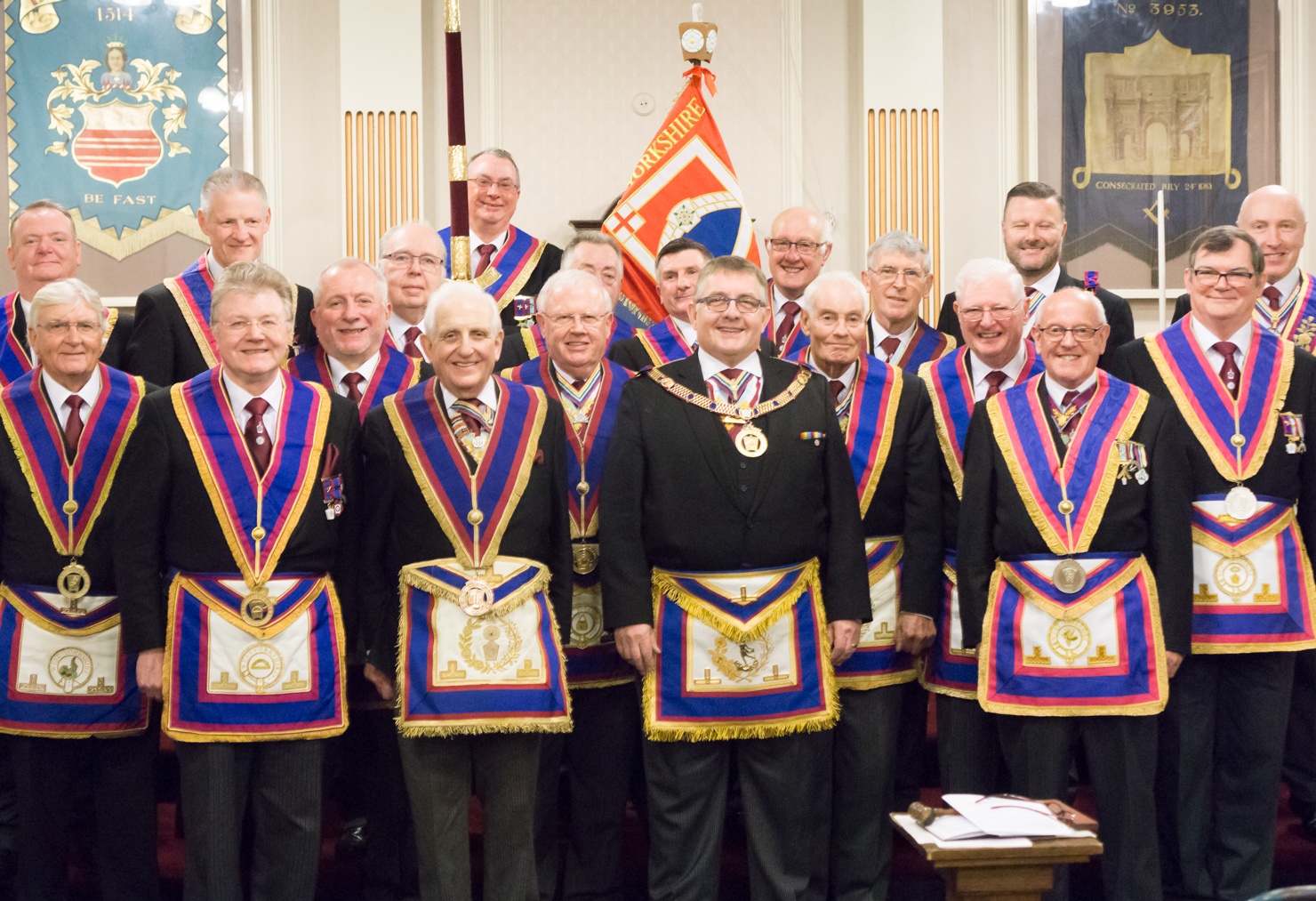 The Deputy Provincial Grand Master, Worshipful Brother Alan Oldfield was in the spotlight on Wednesday, 20th March for this Escorted Visit. He was accompanied by eighteen Officers of the year including the Provincial Director of Ceremonies Worshipful Brother John Vause. Also present were the ‘Tweedle Dum and Tweedle Dee’ of the Province, W.Bro’s. Mark  Holland and Alex Geddes, respectively the Provincial Grand Senior and Junior Wardens. They have been inseparable during their year, now coming towards its close, and can very proud of a job well done, especially in supporting one another on visits.

At the outset, the Director of Ceremonies, W.Bro.Richard Middleton gave a short eulogy in respect of V.W.Bro.Sydney John Bruton Barlow, a titan in the Province, not one to be on the wrong side of but a totally committed, enthusiastic and dedicated Freemason, missed by many. The Worshipful Master, Worshipful Brother Gary Milnes then opened the Lodge in due form and attended to the early items, they including a Declaration of the Master elect for the ensuing year, W.Bro.Fraser McPherson and then similar for the Treasurer, W.Bro.Frank Potts. The latter, in thanking the Brethren for their continued trust, reminded them that he was now beginning his twenty eighth year in the post, I don’t think any one would have courage to stand against him!! Upon a report, W.Bro.John Vause  entered and announced that the Deputy Provincial Grand Master was without, he was duly admitted together with Escort and all took their places.

The candidate Brother Paul Green was then admitted under the care of the Senior Deacon, W.Bro.Tim Crawshaw, whose skilful navigation throughout the ceremony was to be applauded, and the Junior Deacon, W.Bro.Stephen Rhodes. The latter  was the proposer for Paul, his Seconder being  W.Bro. Richard Middleton, all members of Trafalgar Lodge, No.971. He was duly obligated by W.Bro,Gary and submitted his work to The Overseers who undertook their duties to a most acceptable standard, particularly as two were visitors who had been called upon when they arrived; a special mention for the Master Overseer, Bro.Bruce Harrowsmith, exemplary and with only an occasional prompt. The Signs and Secrets were then delivered by Worshipful Brother Richard Walker and I can truly say that in all my travels I may have seen them done as well, but never better, a master class even down to the backward glance at the Chaplain. W.Bro.Fraser invested Bro.Paul with the Badge and Jewel which were then explained by W.Bro.Godfrey Bedford; the Junior Warden , Bro, Jonathan Cole following with the explanation of the working tools and all was supremely encapsulated in the Conclusion by W.Bro.Godfrey. A Ceremony that I am sure Bro Paul thoroughly enjoyed and which will resonate with him for a long time, some significant highlights.

The Lodge was the closed and we adjourned for the Festive Board sitting down at ten past nine approx. All hands to the pumps to help the staff with service and table

clearance resulted in the Toasts commencing about an hour later; congratulations to all who spoke, for we were on our way home before eleven.

The Toast to the Province was given by W.Bro.Gary who thanked all the Provincial Grand Lodge Officers for the sterling efforts they show in ensuring that Mark Masonry in West Yorkshire is on a firm footing. In his response, W.Bro Alan congratulated the man of the moment, yes , the candidate Brother Paul Green, gave him a copy of the year book and hoped that he would have many years to enjoy the Mark Degree. A reminder was then delivered in respect of the Annual Provincial Meeting to be held at Bradford on the 13th April,. This is a must for Masters in the Chair, together with, if possible, their Wardens. It is a special day in our calendar, support the Provincial Grand Master and YOUR Province. He then spoke about the debt we owe to our forebears as we are now the custodians of the Lodges and Province, following in the footsteps of distinguished Mark Masons such as Carl Whitehead, Bram Morley, Brian Addy, Alec Keay and Brian Emmett to name but a few. We must uphold their legacy, remain true to our obligations and, by the Magic of the Order, Mark Masonry will make even better Masons out of Masons. Finally a reminder to all to use their Mark in the Lodge register, it is a key element in differentiation between Mark Masonry and other Orders

A most enjoyable evening,

Enjoy, you are Mark Master Masons